What Christians Ought to Believe: An Introduction to Christian Doctrine Through the Apostles’ Creed 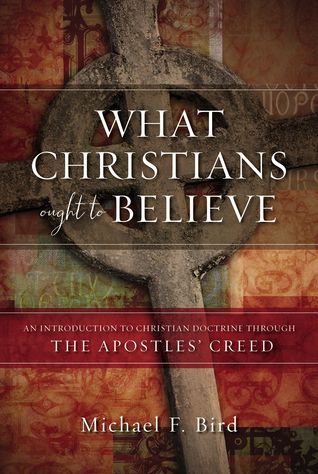 My Rating – Must Read

Level – Medium length, fairly easy and does not require more than a basic knowledge of the Bible or Theology.

Summary
The book is essentially an exposition of The Apostles’ Creed. That is, he goes line by line and explains why we believe it and where the proofs are in Scripture. The first chapter is spent on explaining what exactly a ‘creed’ is – which is incredibly important, especially for us Americans and non-liturgical Protestants, who don’t use them. The second chapter is an argument as to why we need creeds. Among the brief history of the cannon and the early church, I also learned that the ‘Peanut Butter & Jelly’ of Australia is ‘Vegemite & Avocado’. So, there’s that.

The remainder of the book breaks down as follows, with a chapter of exposition on each:

My Thoughts
I remember the first time I went to a ‘liturgical church’ – call and response, where the congregation also recites things – which was a word I didn’t even know. It was my freshmen year in college and this was also the first time I’d ever heard the Apostles’ Creed. This is part of the problem with American Protestantism and the ‘no creed but the Bible’ mentality. So few people know what they believe or why – mostly, I think, because we never articulate exactly what it is we believe, giving us the opportunity to teach specifically, and dive into the reason/scriptural proofs for these beliefs. I was likely in my mid-20’s before I even knew what catechisms or confessions were. It was a loss to me, although they are documents that have been used by educated believers for hundreds of years. Even more dramatically, the Apostles’ Creed has been recited by believers for nearly two thousand years.

This book is a depth of riches. It is a must-read for every Christian, whether new or lifelong believer, pastor or laity. It should be given, by the church, to every new church member or professing believer, as well as the basis of a Bible study, Sunday School class, or even sermon series (or at least a reference). Additionally, you should buy a copy for any questioning/curious unbeliever that you may know. It will become more and more important that believers are grounded in the historic faith of the church, and this is an important first step.

*I received a free copy of this book in exchange for an honest review.