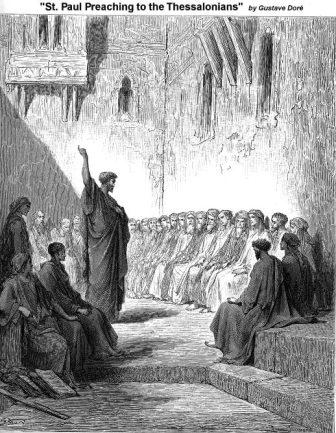 Once again we have a section that whose purpose may show that 2 Thessalonians was actually the first letter (see my intro for more). In 2 Thess 1:5-12, Paul tells the Thessalonians about the second coming of Christ in judgement. In that letter, we are told that Christ will be revealed from heaven. The word is apokalypsei, obviously the word from which we receive the modern English word apokalypse. Paul in 1 Thessalonians (and elsewhere) uses a different word for Christ coming, one that is more triumphal. Likely, the original letter caused the Thessalonians to have two questions, first, if we will greet Christ as he returns, what about those who have died until he returns? Second, when is he coming? These are the last two major points covered by Paul in this letter and what we’ll look at today.

4:13-18
Three times in the this five verse response Paul tells the Thessalonians that those asleep will come first. I think that is a clear indication (and I haven’t seen a commentator who thought otherwise) that Paul is responding to a concern the Thessalonians had regarding the coming of the Lord. It is also worth noting that ‘asleep’ as a euphemism was pretty common in Greek and Latin literateture. It is pretty well attested to in other writings and we shouldn’t make a theological point (such as soul sleep) from Paul’s use of the word.

So clearly, those who have already died will for some reason or another precede us. It says the dead will rise first, perhaps this is because the dead have already spent time in heaven with Christ and returning with him to initiate the New Heaven and New Earth that will come after the final judgement.

The word used here for Christ return is parousia; which means arrival or visit and it was often used for royal or official meetings. A visiting dignitary or returning triumphal king would ‘arrive’ and officials from the city would come out of the gate and welcome him, bringing him back into the city. What Paul is trying to get a across is that while Christ’s return means judgement for the world, it would instead be a  glorious return for us.

Meeting in the clouds would be where we greet Christ and return to Earth. Clouds are often considered the meeting place between human and divine in ancient literature. Likewise, we have Daniel writing of the Son of Man coming on the clouds.

Now, the return will be something like celebratory process, it will be a quick and sudden event. The ESV says  we ‘will be caught up’, the Greek word here is harpagismoetha, which has the connotation of a sudden event such as ‘snatch’ or ‘take away’. The more common word used is harpazo from which we see the Latin word rapio, from which we have our English word rapture.

It is beyond the scope of this study, but I think it is important to know the real meaning of the words used here. An entire ideology, and one with an oversized influence on modern American Christianity, has come up around this word which fairly clearly does no mean what certain people represent it to mean. The main point for now is that the event is sudden and transitions to Paul’s next answer regarding the time of Christ’s return.

A final note on this section, the word Paul uses for ‘rose’ in verse 14 isn’t his typical word used and the structure of the sentence makes it seem as if this might be some early creed among Christians. He may have just used a different word, too, but it isn’t uncommon for early writers to display writings that appear to be known sayings or creeds.

5:1-11
It seems a little odd that Paul writes that he doesn’t need to write anything, and that they already know, then spends 10 verses writing to them what they seem not to know. Again, this is likely something he touched on in his first visit, but after his letter concerning judgment in Christ’s return, they must have been nervous. As it is, Paul ends the section above and this one with the command to encourage one another.

Paul uses a few metaphors to explain the unexpectedness before moving on to tell us how we should act. The word for sleep in this section is different than the one above, and had the meaning more of negligence. Similarly, sober could connote thinking clearly. As fun as day-drinking a napping are, they rarely mean that we are working or acting in an expectant manner. From the other content of the letters to Thessalonica, it appears that some of them might have expected the return to be imminent and were therefore nor working or behaving in the manner they should.

Using light and darkness as good and bad is fairly common, and builds with our wakefulness and sobermindedness, for us to remain diligent in our life as we wait on the Lord. As in other letters, Paul uses the metaphor of armor. Interestingly, Paul touches again on faith, hope, and love. Here he says these three things are our amour as we wait for Christ return, and in 1 Corinthians, we are told that after Christ’s return, those attributes will all remain.

To wrap things up before his final conclusion/instructions/benediction, he reminds them that they are not destined for wrath, as other, but have been destined for life and salvation through Christ who died for us.

A final note on this section, verse 3 might have been an actual saying at the time. Both Diodaus and Siculus have written the phrase ‘comfort in peace, security in war.’ Now, this could be just Paul using two of the same words and it is just a coincidence, if he is saying you will have neither comfort or security, neither peace nor war, but final destruction. However, if it is a play on a known phrase (which was not uncommon in writings at the time), then it is another reminder of Pual being a real person and a real time. It doesn’t have some super spiritual meaning or any great theological point, this phrase anyway, but I like this reminder. It connects me back to this ancient book written in a langauge I don’t know during a time I don’t understand.

So, as Paul says, encourage each other. Whether we are alive or dead, those in Christ will live again and have eternal life. We don’t know when he is coming, and generation after generation has passed without his return, but we continue on. It will come suddenly, or we may die before he does, either way, we encourage each other in our future hope.

Commentaries Used:
The Letters to the Thessalonians (The Pillar New Testament Commentary (PNTC))