A few years ago I wrote post that became fairly popular, called, Some Thoughts on Lent (pretty clever title, right?), most of what I said in then is still most true, I don’t know how to Lent. My church is trying to help this year, especially in a year in which people are not meeting in person, by sending home a box with everyone that has contents to be used the Ash Wednesday and Good Friday services, as well as devotional/calendar to be used for Lent in general.

After church on Sunday, our guys group was talking about the Ashes, and a some people stated they wouldn’t be using them. Classic Reformed, ‘it isn’t in the Bible’. I didn’t have many thoughts, and I asked if anyone knew the history of the ashes. No one did, so I decided to look it up.

The short answer is, ashes were used in the Old Testament as a sign of penitence and mourning. My boy Tertullian believed that confession of sin should be accompanied with ashes and sackcloth. So, clearly, early on the Christians still associated ashes in a similar manner as that of the OT. The basis of Lent is Christ’s 40 Days in the Wilderness in preparation for his ministry, which culminated in his death and then resurrection on Easter. Those who practice Lent engage in 40 days (technically 46) of reflection and repentance leading up to Easter. So, that is it, that is the connection. Looks like Ash Wednesday was really official until the 10th Century for Catholics. Apparently, Orthodox do not do it at all. I had no idea, I kind of always view them as have the same church calendar (even if the days are different) and liturgies. After the Reformation, Lutherans/Anglican didn’t stop. Today other liturgical churches such as Methodist and Presbyterians often hold the service and it appears to be growing in popularity. Other Baptist and non-denominational churches are starting to hold the services.

I actually like it. Then again, I like history and tradition. This will hurt the heads of the academics and teachers who read this, but the Wikipedia article on Lent is pretty good, if you want more info. Along with ashes, two other things are popular, one is saying ‘from dust you came and to dust you will return’, while imposing the ashes. People seem to like it as a reminder of mortality and their short time on the earth. I think it somewhat detracts from the pentinance part, by trying to make the ashes represent too many things. The other is the reading of Psalm 51, which is David’s repentance after being confronted by the Prophet Nathan.

Back to the Anglican thing for a minute, Cranmer, who wrote the Book of Common Prayer, banned the ashes, but it (obviously) came back. This somewhat ironic, as the church I attend is non-denominational that loosely follows the BCP. Interestingly, I have never done the ashes or attended an Ash Wednesday service. You can read in my prior Lent post, I grew up Baptist with no church calendar at all, not even Good Friday. Mrs. MMT and I were members of a Presbyterian church that would have like to do Ash Wednesday, but we met in a community center, so it was difficult to get a service going. I’ve never attend my current church’s service, because MRs. MMT is usually the music for it and I would stay home with Sprout. This year, it is only online, it has actually already been recorded (I ran the sound, on a soundboard that isn’t set for streaming output, so, should be interesting), and we are streaming at 3:00, 6:00, and 8:00 tonight; go here if you are interested.

So, that is a little history of the ashes for Ash Wednesday. I feel like it can be a worthwhile tradition and plan to participate for the first time, tonight. I also found a cool infographic on Twitter that pretty well sums up everything: 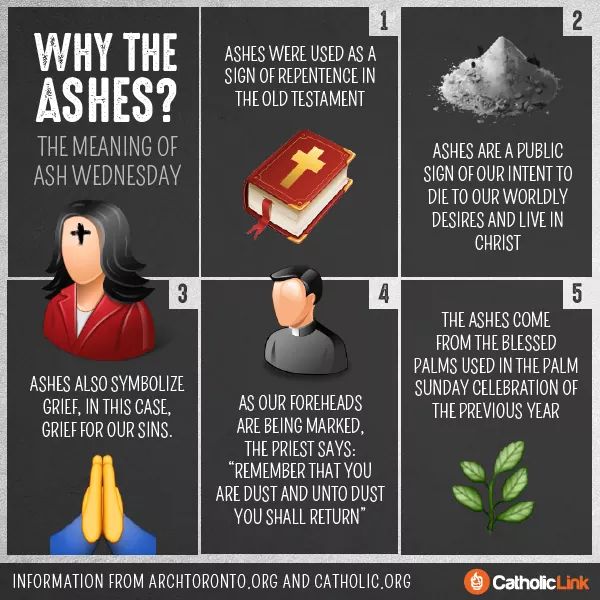